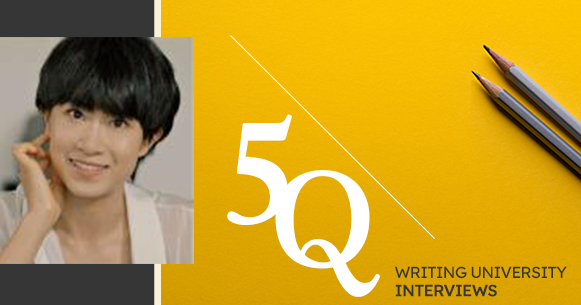 Each year, the Writing University conducts interviews with writers while they are in Iowa City participating in the International Writing Program's fall residency. We sit down with authors to ask about their work, their process and their descriptions of home. Today we are talking with Qi Jin Nian七堇年, a fiction writer, non-fiction writer, and translator from China.

Qi Jin Nian七堇年 (fiction writer, non-fiction writer, translator, PRC) has published a dozen titles, ranging from travel literature to speculative fiction, most recently . 无梦之境 [The Eye Phone Age] (2018).  Her 2013 novel 平生欢  [The Ember of Time] won the Peoples’ Literature Award for Best Novel; her stories have appeared in China’s top literary magazines. She has also edited literary journals and translated from the English. Her participation was made possible by the US Embassy in Beijing.

1. Do you have a plan or project in mind for your time at the residency?

I am planning to modify my latest essay collection during this residency. Those essays focus on my travel to the Heng Duan Mountain area, basically a combination of rumination, thoughts, observations when I was hiking or driving, plus relative quotes from previous readings. A jazz-like writing style, salute to Geoff Dyer or John Berger.

I've always had a theory that humans are inefficient creatures. The brain can ONLY work very creatively and efficiently for no more than 3-4 hours per day.

At least in my case, I get up quite early every day, usually at 6 or 7 am. After having simple breakfast, I would start writing for the whole morning, till the noon. That’s it. I only write in the morning, right before getting up.

Latter I might order some out takes for lunch, and the take a nap, dealing with some emails or other stuff, read some books and the work out for 2-3 hours.

In the evening I would watch movies and read before sleep early.

I write like a commuter between dreams and creativity.

I am reading a Geoff Dyer’s old novel, Pris Trance, only for pleasure. I love this writer and he has been to University of Iowa before.

4. What is something the readers and writers of Iowa City should know about you and/or your work?

The other day I read a saying from the Argentina writer César Aira, says, that when he was a little boy, he was shy and introvert, quite nearsighted, so he hides in books all the time. Latter then, he grew up, became a write himself, and he wrote books for others to hide in.

I really appreciate the verb, hide, in this sentence.

Surprisingly, I’ve met some readers of mine here, exactly in the University of Iowa, during my first week of residency. Some said that my books had accompanied with them during their difficult times. This encounter feels so encouraging to me, that my writing created a safe house for someone else out there to hide in as well.

I started my writing quite early, roughly since 16. Saying this, I surprisingly realize that I’ve been writing for about 20 years so far, during which time I’ve been growing up together with my readers.

I’ve published about 11 or 12 books, novels, short story & essays collections; been the editor-in-chief for some literature magazines in China from time to time, and now I do translation, poetry, screen play writing as well.

At the very beginning, most of my writings is “coming-of-the-age story”, or, in German term, Bildungsroman: realistic stories about young adulthood, yet recently I expanded my genres to speculative fiction and dystopian fiction. They are dark humor, some, even darker, even more satirical. To write those Dystopian stories, is to question the alienation of human beings by technology, the variety of household structure and the essence human existence.

5. Tell us a bit about where you are from -- what are some favorite details you would like to share about your home?

My hometown is in the southwest of China, an outdoor paradise with many famous mountains above 23,000 feets, close to Tibet. People have stereotyped imagination about writers: nerdy, sedentary, while this doesn’t apply to me at all. I wish I was a mountaineer of athlete instead. I am a totally outdoor enthusiastic, prone to climbing, hiking, diving, paragliding and cave exploring. The magnificent wilderness nurtured my narrative that I found healings both exploring them, or write about them. Welcome to enjoy that by yourselves.