In the midst of the coronavirus pandemic, the Writing University has been continuing our series of interviews with writers in the various University of Iowa writing programs. We ask about their work, their process and their descriptions of home. We are posting them now as examples of our shared community strength during this time.

Today's interview is with Nicholas Runyon, a junior studying English and creative writing at the University of Iowa. 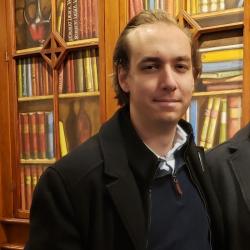 Nicholas Runyon is a junior studying English and creative writing at the University of Iowa. He is the editor-in-chief of New Moon Magazine and a fiction editor at earthwords: the undergraduate literary review. He grew up in Martinsville, New Jersey, but he possesses an accent that people have a hard time pinning down no matter where he goes.

I always have a number of projects going at once, such as several short story collections with only one or two stories so far. I guess that's just my ideas outpacing my actual productivity. However, my most fleshed-out projects right now are my second novel, which is epic fantasy, and a sequence of sonnets that treat life during the pandemic, among other things.

2. What does your daily practice look like for your writing? Do you have a certain time when you write, or any specific routine?

During the semester, I have very little time to write. Every spare hour I can devote to drafting a poem or piece of fiction not for a class is a real blessing. During summer and winter break, I try to write two thousand words of a novel per day, starting in the morning and usually ending in the early afternoon.

I'm currently listening to the audiobook for Rhythm of War, which is the newly released fourth book in Brandon Sanderson's Stormlight Archive series. That series is highly recommended for anyone looking to get into hardcore epic fantasy. I'm also reading Leaving the Atocha Station by Ben Lerner, which is a formally experimental novel that reflects on the inadequacy of art—just about the polar opposite of Rhythm of War.

4. Can you tell us a little about your experience as an English Creative Writing Major and your work with NEW MOON Magazine?

I think there's no better place to study creative writing than at the University of Iowa. I love the support that workshop classes foster and the sense of shared enterprise I feel in the community of writers around me. I've had to stay at home in New Jersey this semester, and I miss campus dearly. Of course, the other great thing about the University of Iowa is the opportunity to work on its many campus literary publications, and to have work published there. I'm immensely grateful to have been the addendum editor for Ink Lit Magazine Issue 16, and for my current role as one of the fiction editors for earthwords. Last semester, I founded New Moon Magazine as yet another place for undergraduate literary work to be shared with the community. I also hoped to enhance the accessibility of that work through New Moon's frequent publication and focus on short-form work. Unfortunately, our plan to distribute our one-page issues around Iowa City was thwarted by the pandemic, but we've released a digital edition of the magazine every month this semester, and I couldn't be prouder of the work we've done.

5. Tell us about where you are from -- what are a few of your favorite details about your home?

I grew up in Martinsville, New Jersey, in a cul-de-sac at the bottom of a hill. Here, suburbia takes the form of a sprawling maze rather than a developed grid of streets. You need a car to get just about anywhere. That being said, there's a back road within walking distance of my house that leads to part of Chimney Rock Park, where there are some nice hiking trails. It features a concrete platform known as the "Hawk Watch" overlooking the eponymous Chimney Rock, which looks like a pillar of crumbling white chalk and is always surrounded by a pile of multicolored glass shards from smashed bottles. Below that is a gigantic, noisy stone quarry. Very occasionally, there are one or two hawks. I've been walking around there a lot recently to get out of the house.