Before the coronavirus pandemic, the Writing University conducted a series of interviews with writers while they were in Iowa City participating in the various University of Iowa writing programs. We sat down with authors to ask about their work, their process and their descriptions of home. We've recently caught up with them again to check in. We are posting them now as examples of our shared community strength during this time. 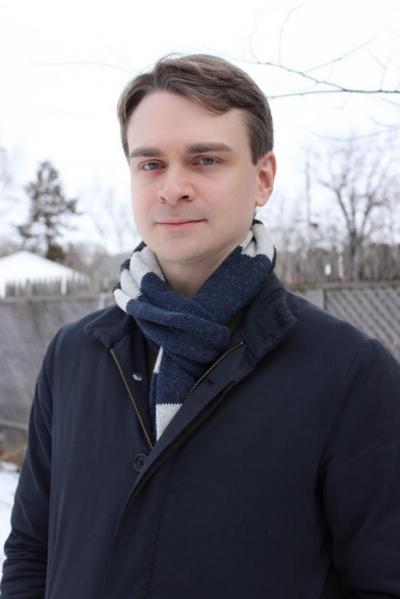 David M. Smith is a translator of Norwegian literature who is finishing his MFA in Literary Translation at Iowa in the spring of 2020. In the fall, he will enter the PhD program in Scandinavian Studies at the University of Wisconsin, Madison.

I’m working on two translation projects concurrently. The first is an extended excerpt from Novel 1987 by Dag Solstad, one of Norway’s most prominent living writers. This is a rather strange novel about a historian named Fjord who joins the Norwegian Maoist movement in the 1970s. Historically, the radical left in Norway counted many authors like Solstad among its ranks, and my translation will be an important contribution to English readers’ understanding of this era in Norwegian letters. Solstad’s chief stylistic influence for the novel was Marcel Proust, and my translation challenge was to recreate the very long, winding, Proust-influenced sentences without alienating the reader too much. The excerpt from Novel 1987, together with a critical introduction, will compose the MFA thesis project I am turning in this semester. In the intro, I’ve written about a meeting I had with the author himself last summer in Norway (a trip made possible by a Stanley Fellowship and MFA Summer Fellowship from the University).

The other project is a collection of short stories by Tarjei Vesaas, another giant of Norwegian literature, who died in 1970. In many ways Vesaas is the stylistic opposite of Solstad, writing in very short, clipped sentences that sometimes even omit the subject. The austereness of Vesaas’s prose can be surprisingly lyrical, however. As the translator, I have to resist the temptation to expand when the text wants to remain brief, to clarify when the text wants to remain ambiguous. In this project I’ve been helped by the author’s daughter, Guri Vesaas, whom I met on the same Iowa-funded trip to Norway last summer. I’m under contract to edit and translate this collection for Archipelago Books, with a tentative pub date sometime in 2022. In the meantime, interested readers should check out Vesaas’s The Ice Palace (English translation by Elizabeth Rokkan), a novel in which a young girl is haunted by an experience that she herself struggles to put into words. The novel is one of Vesaas’s most poignant depictions of the trials of children and young people.

2. What does your daily practice look like for your writing? Do you have a certain time when you write, or any specific routine?

Here at Iowa, I’ve been taking multiple classes, teaching Rhetoric as a grad TA, and serving as the managing editor of Iowa’s translation journal, Exchanges. All of which is to say I’m lucky if I can find to translate on any given day! I don’t have a set time for when I translate, but in general I do my best work late at night. I generally also depend on the adrenaline rush of a deadline to get things done, which fortunately has worked out well for me so far with no major catastrophes.

The translator Susan Bernofsky described three stages of a translation that I more or less follow. First, I bang out a very rough draft of the translation as quickly as possible, without regard to accuracy or aesthetics. Then, I comb through the text with my Norwegian dictionaries to make sure it is lexically faithful to the source. The final stage is to put away the source and focus on producing a polished text that sounds natural to the English readers’ ear. Usually, a text will require multiple iterations of the latter two stages, but this at least gives a rough picture of how I translate.

My undergrad degree is in English lit, and I find a particular pleasure in reading Norwegian translations of works I’m already familiar with in English. Reading literature from one’s native tongue in a foreign translation is something many translators I know do. People often point out that some element is inevitably “lost in translation,” but I actually think foreign translators bring out unexpected resonances that are easy to miss when reading in your native tongue. In these difficult times of COVID-19, I’ve found some comfort in reading Kurt Narvesen’s 2006 translation of Walt Whitman’s Leaves of Grass, entitled Gresstrå in the Norwegian. Here one of my favorite poems, “Scented herbage of my breast,” becomes “Ville blomster i mitt bryst”; Narvesen nicely captures the sound and the feel of Whitman’s original if not the word-for-word sense (“wild flowers of my breast” is the rough back-translation).

4. What is one thing the readers and writers of Iowa City should know about your work?

Like any other craft, translation takes a lot of hard work and persistence to perfect. I first tried my hand at translating literature on my own about five years ago. At that time I had little idea how to break through in the field; I just knew that there were these works of Norwegian literature that I loved and that I would like to bring them to English readers somehow. To get to the point where I am now has taken a significant personal investment, in terms of going to professional conferences and book fairs, having face-to-face meetings with publishers, authors and other translators, getting my name out there, getting assignments. Not a few times, I’ve had to pull myself back up after my translations were rejected. Fortunately I love what I do enough to have kept at it through the setbacks. This is not a very lucrative field (as any literary translator will attest from experience), so the translators that I know do what they do out of love. All that we ask is that our work gets acknowledged!

5. Tell us about where you are from—what are a few of your favorite details about your home?

Unusually for a Norwegian-American, I was born and raised in the South, in the Atlanta suburbs. Growing up there, I was curious about the land and language of my ancestors, but it wasn’t until I graduated from the University of Georgia that I began studying Norwegian. Soon after, I actually ended up living in Bergen, Norway, where I ended up staying for about six years altogether. Since the Norwegian-American branch of my family is from Wisconsin, I guess you could say my time in Iowa has been a Midwestern homecoming of sorts!