The Writing University conducts a series of interviews with writers associated with the University of Iowa through our myriad of creative writing program, and our publishing world on campus. We sit down with authors to ask about their work, their process and their descriptions of home.

This year, we are celebrating the 50th Anniversary of the University of Iowa Press with a special editon of 5Q Interviews of UI Press authors. Happy Birthday UI Press!

Today we are speaking with Ed Folsom. 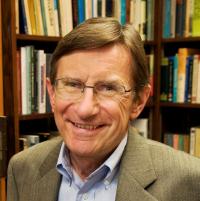 Ed Folsom, the Roy J. Carver Professor of English at The University of Iowa, is the editor of the Walt Whitman Quarterly Review, co-director of the Whitman Archive (www.whitmanarchive.org), and editor of the Whitman Series at The University of Iowa Press. He is the author or editor of numerous books and essays on Whitman and other American writers. He has appeared on programs on PBS, CBS, NPR, and other media outlets, discussing Whitman. He is the recipient of awards and fellowships from NEH, the National Archives, and the Guggenheim Foundation.

For me, “project” is always a plural. The online Whitman Archive, which I’ve been co-directing since its inception in 1995, is an ongoing project that requires my attention every day, and many days all day. The same is true for the UI Press Iowa Whitman Series, which I edit: I’ve always got manuscripts on my desk that I’m either reading or editing: we always have submissions to consider and manuscripts in production. Since it began, this series has produced over twenty-five books. Then there’s the Walt Whitman Quarterly Review, which I’ve been editing since 1983: again, I always have a stack of manuscripts that I’m either reading or editing, and, as soon as we get one issue out, it’s past time to get started on the next. Currently, I’m trying to finish up a book on Whitman and the Civil War that Chris Merrill of the International Writing Program and I wrote back when we were teaching the MOOC on Whitman’s Civil War writing, and I’ll soon be writing the final entry for the North American Review “Every Atom” series on Whitman’s “Song of Myself,” which has consisted of 200 poets, writers, scholars, musicians, filmmakers, and artists each writing a response to a few lines of the poem every day for the first 200 days following Whitman’s 200th birthday this past May: that project is up to entry number 164. I’ll be writing entry number 200, which will attempt to somehow pull together the first 199!

My routine is to try to get through my always overloaded email inbox in the morning (I consider answering emails “writing”). If I don’t get to emails right away, they sink deeper and deeper in the inbox, and I depend on people who haven’t heard back from me to try a second (or third) time. Most of my own writing gets done late at night: I have always been a late-night person, though that has begun to change in recent years. Now I have to work harder to keep myself awake after midnight, but, when I can, I still get good writing done from then until about 2:00 a.m.

As my comments above indicate, my reading is largely about Whitman and American poetry—books and essays for the Whitman Series and for the journal, and a lot of proofreading for the Whitman Archive. I feel guilty about not reading enough outside of my research interests, but I also feel guilty when I do read outside nineteenth-century American literature and culture, because that means I’m falling behind on my editing obligations. Still, I do try to get to more recent books now and then. I’ve just finished Mary Morris’s funny and illuminating Between You & Me, which tells of her career as a copyeditor at the New Yorker and also manages to deal with a ton of fascinating and gnarly grammatical problems. Other recent reads include Ta-Nehisi Coates’s bracing We Were Eight Years in Power, George Saunders’ mind-blowing Lincoln in the Bardo, and my colleague Garrett Stewart’s eye-opening The Value of Style in Fiction. I’m about to begin a new book by another colleague—David Hamilton’s A Certain Arc.

4. Tell us about where you are from -- what are some details you would like to share about your home?

I don’t really know where I’m from: it’s probably safest to say I’m from the “Industrial Midwest,” born in Pittsburgh, raised in Chicago, Columbus, and Cleveland (I just needed Detroit for the full circuit), with short stints in Huntington, West Virginia, and a small town in Ohio called Coshocton. I went to high school in a Cleveland suburb, though, and I’m still a Cleveland Indians fan, so I guess that’s the closest thing to “home” for me.

My career at Iowa is so intertwined with the UI Press that it would be hard for me to begin to articulate just what that relationship consists of. I began serving on the Press’s advisory board when Paul Zimmer became director back in the mid-1980s and learned how the operation worked. I was involved in the search that hired Holly Carver as director and also chaired the search that made Jim McCoy director. I began recruiting Whitman titles for the Press back when Paul was director, and then Holly asked me to edit an actual Whitman Series, which I continue to do. Iowa has now published more books on Whitman since the 1980s than all other university presses combined! I finished another stint on the editorial board after Jim became director and restructured the way the board worked. I cannot imagine the University of Iowa—the “Writing University”—without the UI Press, which—like so much of the rest of the University of Iowa—is small compared to its peers but with a reputation that far exceeds its size.