Before the coronavirus outbreak, the Writing University conducted a series of interviews with writers while they were in Iowa City participating in the various University of Iowa writing programs. We sat down with authors to ask about their work, their process and their descriptions of home. We are posting them now as examples of our shared community strength during this time.

Here is our interview with Playwriting MFA candidate SP O'Brien. 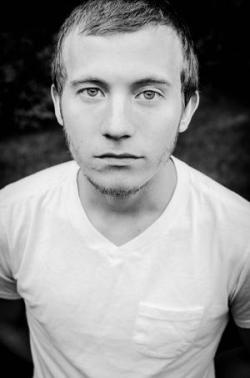 SP is an MFA candidate at the Iowa Playwrights Workshop. Hailing from the smallest state in the country, SP has also lived in Vermont, New York, Arizona, California, and France. He was a 2016 Core Apprentice at the Playwrights Center in Minneapolis, a 2016 Best of Fringe Winner in the FringeNYC, and a 2017 Honorable Mention for the Relentless Award. He most recently was a 2019 recipient of Theater Masters’ Take Ten Play Lab where his short play SUCKERS was workshopped and subsequently produced. It will be published by Samuel French in 2020.

1. Hello SP! Do you have a specific project that you will be working on this year?
I'm receiving two productions this semester and I'm so grateful. I'm currently in rehearsals for my play Palanquin, directed by Sarah Hamilton. It's a cast of eleven women and it's an adaptation, of sorts, of the reality show Paris Hilton's My New BFF. It's a nightmare play about reality television. [In spring] I'll start rehearsals for my play Colic, which centers itself around a high school "Flour Sack Baby" project and two sisters who have recently lost a parent.
2. What does your daily practice look like for your writing? Do you have a certain time when you write, or any specific routine?
If I'm writing a first draft I like to be alone. I drink a lot of coffee. If I'm writing at home I need everything to be clean. I like to vacuum. I also need to take frequent breaks -- usually with episodes of Lingo and Family Feud. I like game shows. In general I don't have a specific routine. If it's really nice outside it's hard for me to write. It's easier for me to write when it's dark or when the weather is gnarly.
3. What are you currently reading right now? Are you reading for research or pleasure?
I'm reading The Broken Mirror: Understanding and Treating Body Dysmorphic Disorder by Katharine A. Phillips. I'm doing research for a play that I'm interested in writing one day. I've also been reading a play called Corps plongés dans un liquide by Christine Angot. I'm currently translating it into English. While I know some French, I'm nowhere near fluent so it's been an exciting challenge. It's mostly an exercise for me in revisiting the unknown depths of a language I'd like to learn more about.
4. What is one thing the readers and writers of Iowa City should know about you and your work?
I would like to think I'm funny. I can also be serious; a lot of my plays can be a little bit uncomfortable. Or, a lot a bit. Depending on who you are. I tend to perform in my everyday life, as most people do. Being gay has led me to lead my life in a very upbeat, energetic way; truthfully, I can be quite low-energy. I need to re-energize and spend a lot of time alone in order to function properly with people. That being said, I love writing plays because they can't exist without other people. Plays are blueprints. Plays can't exist without the help of a team.
One of my favorites sentences in the whole entire world is "I don't know". I love that sentence because when we say that sentence it opens us up to learning something. People who claim to know everything never say "I don't know" and that means that they never learn anything. I love learning and I'm confident enough in myself to admit, frequently, that there are so many things that I don't know. Being a playwright, in my opinion, means that you frequently have to say that sentence. That's why I love what I do. I'm constantly learning something every single day.
5. Tell us about where you are from -- can you share a few of your favorite details about your home?
I hail from Warwick, Rhode Island. It's one of the largest "cities" in the smallest state. I put cities in quotes because it's not really a city; however, by Rhode Island standards it is. I come from a large, disconnected family. I have three sisters, two brothers, and three ex-step-sisters. My siblings are all half siblings. That doesn't actually mean anything except to share that none of us have the same two parents. I was raised by my mother, my aunts, my godmother, my grandmothers, and my oldest sister Jami-Lee. I was surrounded by women. I often write about women so I think it's important to share that I was raised by women. My upbringing had a huge impact on what I write about. A playwright I studied with once, named Deb Zoe Laufer, told me in a class that everything you write about happened to you before you were eight years old and I think about that statement often.