The Writing University conducts a series of interviews with writers while they are in Iowa City participating in the various University of Iowa writing programs. We sit down with authors to ask about their work, their process and their descriptions of home.

Today we are talking with Nonfiction MFA candidate Darius Stewart. 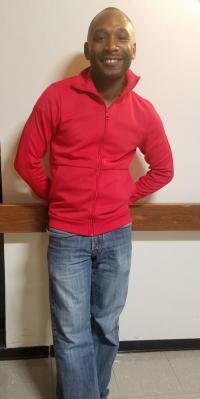 Darius Stewart is a third-year MFA candidate in the Nonfiction Writing Program and will graduate this spring. He also holds an MFA in poetry from the Michener Center for Writers at the University of Texas at Austin. He has authored three poetry chapbooks, including The Ghost the Night Becomes, 2013 winner of the Gertrude Poetry Chapbook Contest, and his essays and poems can be found in Fourth Genre, storySouth, Appalachian Heritage, Callaloo, and others. He was recently awarded the second annual Englert Nonfiction Fellowship.

1. Hello Darius! Do you have a specific project that you will be working on this year?
​Yes, I'm completing my thesis this, titled "The Body Within the Body." It's a collection of autobiographical essays that engage with the consequences of drug and alcohol use disorders. Of course, that's the overarching concept. The project is also concerned specifically with exploring living with HIV, sobriety, sexuality, and a small glimpse into the entanglements of romantic love (and sometimes, harmful lust).

2. What does your daily practice look like for your writing? Do you have a certain time when you write, or any specific routine?
​My daily practice is changing quite drastically these days. For instance, it's nearly 6 o'clock in the morning, and  I'm usually asleep at this hour, and here I am completing these interview questions... lol. I'm sure it's because I'm working on my thesis, and I figure that sleep is as much a luxury as it is a necessity. Ordinarily, I prefer to write at night. My philosophy is that I need to go out and live so that I might have something to write about. And not necessarily about what happened that day, but what happened that day that might help formulate a new idea for a piece, or quite often, contribute to an existing one.

3. What are you currently reading right now? Are you reading for research or pleasure?
This is a good question. I'm trying to up the ante on my Goodreads Reading Challenge this year, so I'm reading as much as I can. So far I've read eight books since the new year: Call Me By Your Name and Find Me by Andre Aciman, How We Fight for Our Lives by Saeed Jones, No Ashes in the Fire by Darnell L. Moore, What Belongs to Me and Cleanness by Garth Greenwell, Blackbird by Larry Duplechan, and Lie with Me by Philippe Besson. I read these books for both pleasure and research since these authors either write about the gay experience in general or the black gay experience specifically, which has helped to inform the current writing I'm doing.

4. What is one thing the readers and writers of Iowa City should know about you and your work?
I tend to be a very lyrical writer, or what some people would call poetic, though I'm not comfortable with this particular description. It assumes too much that I'm writing poetry masking as prose. I'm more interested in using syntax to create lyricism, which isn't necessarily the same as being "poetic." I think this lyrical style contributes to the subjects I write about. I also like to subvert narrative conventions whenever possible, which is why my essays often have the narrative thrust of the memoir, for example, but often use essayistic techniques such as mimesis or mosaic to render an emotionally resonant experience for the reader. My work is also deliberately self-contained in the tradition of the essay rather than as an excerpt from a longer form.

5. Tell us about where you are from -- can you share a few of your favorite details about your home?
I'm from Knoxville, TN, where I was born and raised. It is home to the Sunsphere, which has served as the symbol for Knoxville since it hosted the 1982 World's Fair. It was also featured prominently on an episode of The Simpsons, which is pretty remarkable --if also completely arbitrary--for cities like Knoxville that tend to fly under the radar. We also boast some very notable writers: James Agee, Nikki Giovanni, Alex Hayley, Cormac McCarthy, to name a few. And, of course, there's Quentin Tarantino.