The Writing University conducts a series of interviews with writers while they are in Iowa City participating in the various University of Iowa writing programs. We sit down with authors to ask about their work, their process and their descriptions of home.

This year, we are celebrating the 50th Anniversary of the University of Iowa Press with a special editon of 5Q Interviews of UI Press authors. Happy Birthday UI Press! Today we are talking with UI Press author Peter Kaufman. 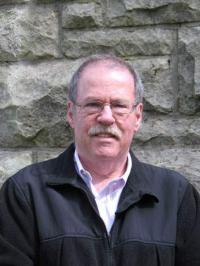 Peter Kaufman was born in Cleveland, Ohio. He received a BA in History from the University of Cincinnati and an MA in History from Penn State University. After graduating from Penn State, Kaufman moved to New York, where he worked as a science writer for the Polytechnic Institute of New York. Kaufman also freelanced and wrote several articles for general interest publications and a number of medical magazines. Also, while in New York, Kaufman was a member of the National Association of Science Writers. Returning to Ohio, Kaufman wrote a novel about his experiences on Kodiak Island, Alaska in the 1970s. The book, entitled Barometer's Shadow, was published is 2005. Skull in the Ashes is his second book. A culmination of six years of research and writing, it was published in 2013 by the University of Iowa Press.

Kaufman’s current project involves researching and writing about a 1946 tsunami that destroyed a lighthouse in Alaska, killing five US Coast Guardsmen.

Yes. I’m currently working on a non-fiction book about a 1946 tsunami that destroyed a lighthouse in Alaska, killing all five US coast guardsmen who were stationed there. It’s going to take me several more years to research and write this book.

I try to get up every morning and begin writing and researching, usually at about 7:00 AM. Because I am retired now, I have more time to write.

I also make sure that I am close to a pad and pencil during the day, so if I get any ideas, I can jot them down. I’ve found that my subconscious is always working on ideas.

I’m currently reading The Teammates, by David Halberstam along with Speed Duel, by Samuel Hawley. Other authors whom I enjoy are Stephen Ambrose and Doris Kearns Goodwin.

While I read these non-fiction books for pleasure, I also try to learn from them—how they are researched, how they are written, and how they are structured.

4. Tell us about where you are from—what are some favorite details you would like to share about your home?

I’m from Cleveland, Ohio but have lived in Cincinnati for many years. When I was in my 20s, I lived in Kodiak, Alaska for about a year and a half and worked in several canneries. Alaska has had a large impact on my life. All three of my books have some connection to that state.

My second book (Skull in the Ashes), was a direct result of Jim McCoy seeing an article I wrote for an Iowa magazine and asking if the UI Press could see the manuscript when I was finished. I really enjoyed the experience of working with everyone in Iowa City—they were first-rate editors and they made my job of doing the final writing and editing much easier. Their comments were always on the money, and they did a wonderful job of shaping the book’s contents.