At the reading: Mary Szybist

Often, the most telling part of a reading is right before it begins. Sometimes I am able to drag along my husband or a friend, but at this reading, I was alone in the front row, a space very few choose to sit. Since I usually have to sit somewhere near the front to get a good photograph, I am often placed in a very strange and awkward position. 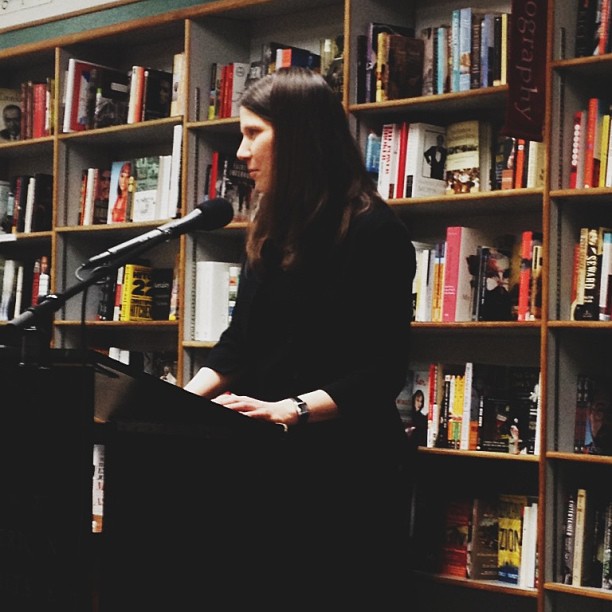 gical standpoint, the front row is a prime place to sit: one can hear better, see better, and there is space to stretch one's legs instead of scrunching up next to a stranger or other classmates, but it also seems to be, even if it isn't necessarily the case, a place of privilege, reserved for the reader or other's directly involved with the reader. Placing oneself in the front row is an unspoken message: I am here, and I am directly involved. Perhaps this is why so very few choose to sit there. We do not want to feel as if we are imposing on the author's space, and because we know that the only person truly involved is the author.  Perhaps it is also a midwestern humbleness, or attempt at humbleness, that creates such tension.

Whatever the reason, I was able to see how Szybist interacted with people as they arrived. There were the usual cheek-kisses as greetings that I see with former Workshop colleagues and friends, but there were also warm hugs between Szybist and people from the community, older and middle-aged, perhaps due to her former teaching position at Iowa City West High School. It was plain to see that Szybist was very much a part of Iowa City, in addition to the two years she spent in the Workshop. 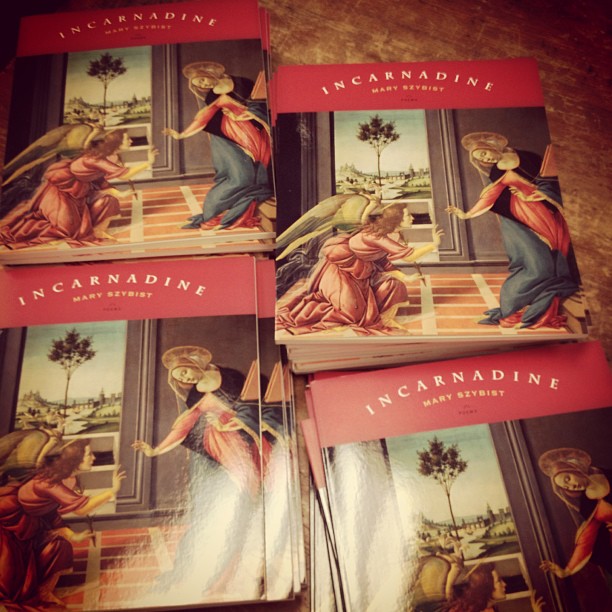 This front-row tension was quickly diffused after Mary Szybist began to read. Prairie Lights owner Jan Weissmiller framed her work well, explaining that the title of her second book "incarnadine" was first only a description of color and then "Macbeth tinged it with blood". Szybist's poems are sensual, yet violent, spiritual yet yearning, the work one does in the space between two beings. The way she performs them is to see a poet intimately familiar with her own work. Szybist languishes in the words that she reads, and often makes eye contact with the audience while reading, a rare occurrence.

Her first poem was a self-described "invocation of the muse", a plea to imaginary creatures taken from the language of a CPR manual. When one listens to Mary Szybist read, we cannot help but go with her to even the dark places: a woman throwing her children off a bridge in Portland, Oregon, a child eating the eyes out of fish, or the Cathars returning home after being subjected to torture, and the places of infinite beauty and light: girls assembling a puzzle of the Annunciation, ruminating on whether or not an octopus would love you, and the many incarnations of the news of miraculous birth. To listen is to utter, like the other Mary, "yes".