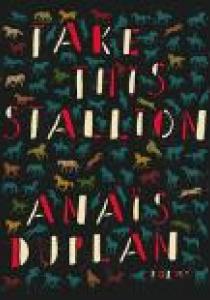 Archive Text: Writers’ Workshop graduate Anaïs Duplan reads from their new book of poetry, Take This Stallion, published by Brooklyn Arts Press. "I have never before read a book like Anaïs Duplan's Take This Stallion. Their major talent is recognizing the self in the other, making for poems that flow forward in a tone of oneness—is oneness a tone?—poems that make evident an ever-expanding world by opening themselves up into that world." —Jericho Brown Anaïs Duplan was born in Jacmel, Haiti. They are the director of a performance collective called The Spacesuits and of The Center for Afrofuturist Studies, an artist residency program in Iowa City. Their poems and essays have appeared in Birdfeast, Hyperallergic, The Journal, [PANK], and other publications.

Louis Chude-Sokei reads selections from his forthcoming memoir, An Immigrant Alphabet. Louis Chude-Sokei is the author of The Last Darky, finalist for the Hurston/Wright Legacy Award in Nonfiction, and the most recent book, The Sound of Culture: Diaspora and Black Technopoetics. He currently teaches at the University of Washington, Seattle and is Editor-In- Chief of the newly revamped The Black Scholar, one of the oldest and most influential journals of Black thought in the U.S. His forthcoming books include An Immigrant Alphabet, and a critical work, Dr. Satan’s Echo Chamber: Essays in Dub.