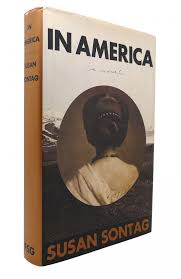 A reading by Susan Sontag recorded on April 27, 2000, was re-broadcast, in memoriam, Dec. 31, on the "Live From Prairie Lights" series, hosted by Julie Englander on University of Iowa radio station WSUI, 910 AM. Sontag died Dec. 28 at the age of 71. In the 2000 event, Sontag read from "In America," which later won the National Book Award. The main character is a Polish actress who travels with her family and a group of Poles to California in 1876 to found a "utopian" commune. When the commune fails, she returns successfully to the stage -- having become an American. Sontag was the author of three other novels, "The Benefactor," "Death Kit," and "The Volcano Lover"; "I, etcetera," a collection of stories; several plays and film scripts, including "Alice in Bed" and several works of nonfiction, including "Against Interpretation: And Other Essays," "Styles of Radical Will," "On Photography," "Illness As Metaphor" and "AIDS and Its Metaphors." Sontag's stature as an American literary and philosophical figure began in 1964 with the article "Notes on 'Camp'"in the quarterly Partisan Review. That article, which was reported on in news magazines, brought to national attention her new definition of "camp" as the "love of the unnatural, of artifice and exaggeration." During the 1960s and 1970s Sontag's essays and observations, in publications including the Partisan Review and Commentary, had a strong influence on the American counterculture, making her one of America's most influential -- and most quoted -- intellectuals.