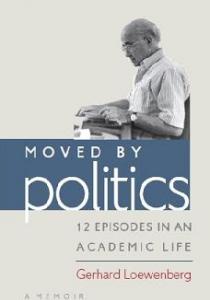 University of Iowa’s Professor Emeritus Gerhard Loewenberg reads from his new memoir, Moved by Politics. In his memoir, Loewenberg tells of twelve experiences in his life that were firsts for him. From his first experience of America as a seven year old emigrant in 1936, to his first experience entering college, to his first discovery of political science as a profession, to his first becoming dean of the College of Liberal Arts, Moved by Politics tells twelve fascinating stories of a life in politics and much more. Loewenberg’s captivating memoir shows how politics have had a profound influence on his life. Politics were the reason for leaving Nazi Germany, were pivotal to everyday life as World War II unfolded, the focus of his own studies in becoming a political scientist. He tells of his experience being on the administrative side of University politics during the turmoil of the 1960’s and 70’s. Gerhard Loewenberg is a Fulbright scholar, co-founder of the Legislative Studies Quarterly and is a Fellow of the American Academy of Arts and Sciences and a recipient of the American Political Science Association’s Frank J. Goodnow Award for Distinguished Service. He lives in Iowa City.